Uniforms at airports can vary big time! There are different uniform recommendations in different countries, airlines and roles.

Understanding those uniforms can be a great way to stay informed and calm at the airport, and can even help you get to grips with your dream job at the local airport.

We’re going to take a look at different jobs around the airport and what clothes, colours and accessories they are expected to wear.

For commercial airlines, you might be imagining the captain’s hat, gold airline badges, shirt and tie and the chevron-like patterns on their shoulder pads (called epaulets). Traditionally, this wasn’t the case.

Original pilot uniforms were bomber jackets, leather flying helmets and brown pilot goggles (particularly on aircraft without windows). It wasn’t until Pan American Airlines regenerated their pilot uniforms in the 1940s to assimilate their crew with naval captains. You may recognise the smart shirt, tie and colour scheme: often blue and white or black and white.

Why do pilots wear a uniform (and what was wrong with the bomber jackets)?

Studies show that passengers feel more secure, calm and more likely to follow orders in an emergency, if the authority figure looks like they belong there. In short, if your pilot is scruffy and disorganised, you’re less likely to feel at ease and trust them. Modern pilots pay a lot of attention to their dress-code and attitude to mark their authority. 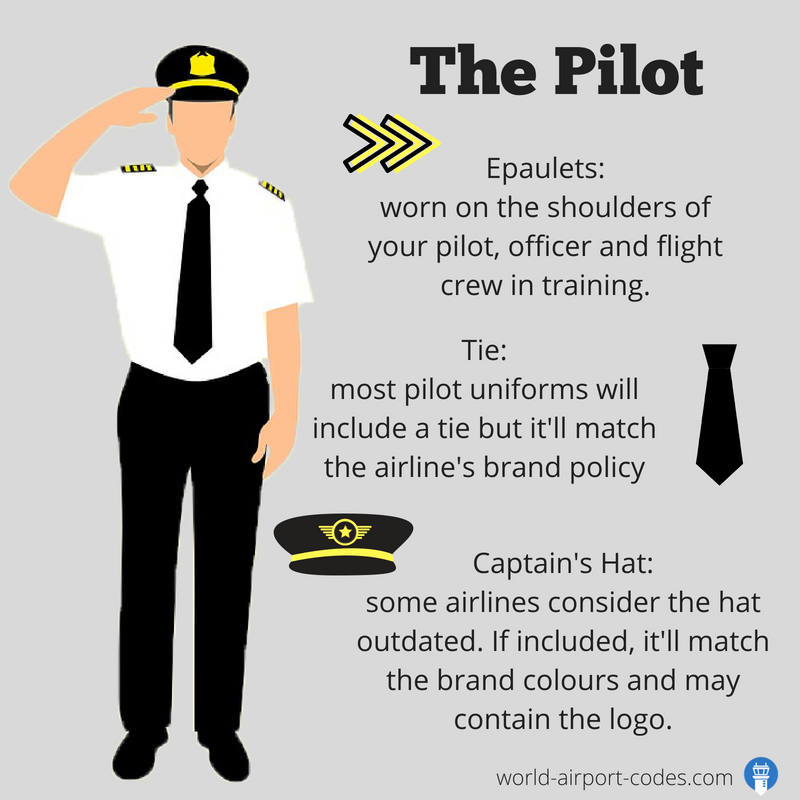 Let’s look at epaulets. Epaulets are the chevron triangles on the pilot’s shoulder pads. They are made to stand out: usually black and yellow or black and white. Epaulets always point away from the pilot’s head.

The pilot is the head of command on any flight. The difference between four and three epaulets (or Senior First Officer and Pilot) is usually at the discretion of the airline. Often, four epaulets denote how long they have been employed by the airline as a pilot.

This is second or third in command of your flight crew. It’s usually based on length of employment at the airline or by how much training the individual has had. This person is another co-pilot for your flight.

One Stripe = Third Officer or Trainee

This officer is often the cruise pilot and will take over at cruising altitudes and is usually in training to become a fully fledged pilot. 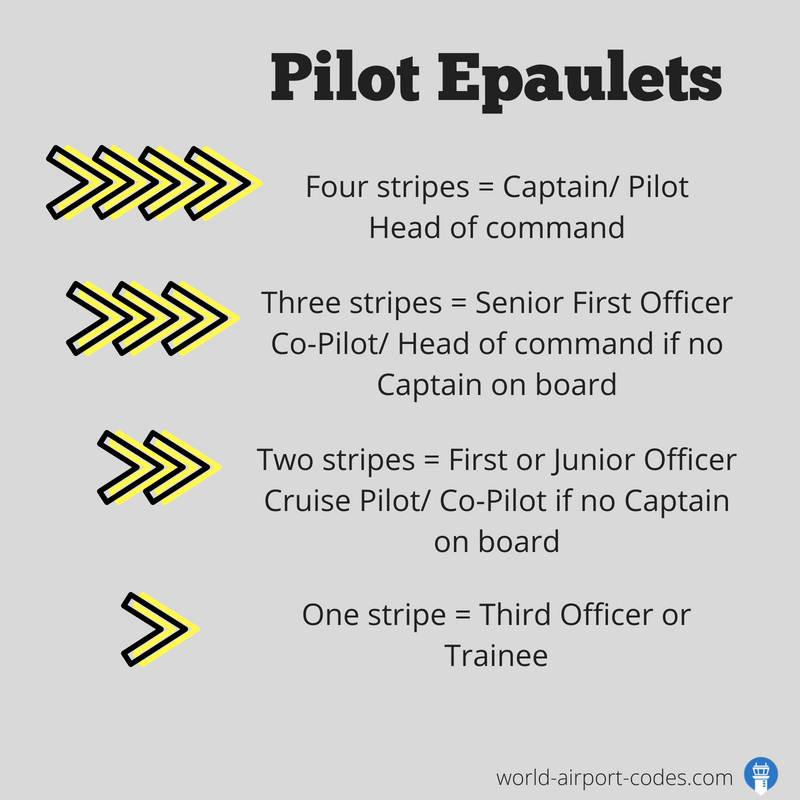 Parts of this image is true: decorative hats came in the 1940s along with the updated pilot uniforms, skirts got shorter with the 1960s fashion and the 1970s and 80s brought in bright colours and cravats.

Why do air hostess and flight crew uniforms look the way they do?

Unlike the pilot uniform which is made to command respect, authority and professionalism; flight crews are expected to be welcoming, approachable and to be the human image of the airline. Flight crew uniforms can be more fashionable and keep up with the times. 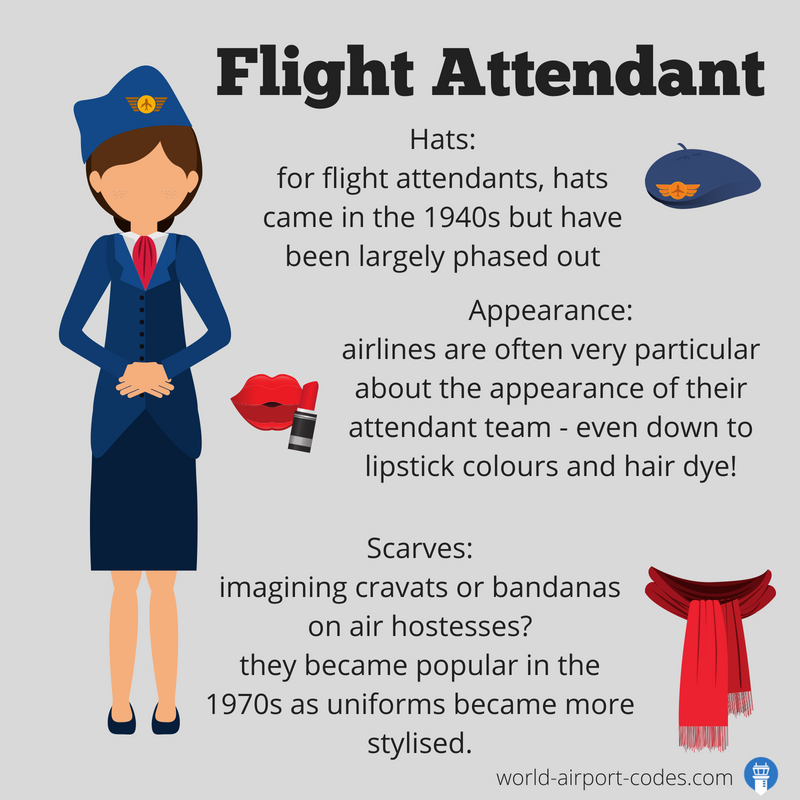 Unlike the impression we get from pop culture, modern flight attendant uniforms can be combination of anything: saris, western suits, pillbox hats and headscarves.

For example, Skytrax awarded the World’s Best Airline Cabin Crew 2018 award to Garuda Indonesia. Their uniform is a modified kebaya: smart silk blouses with a brooch, a long skirt for the women and suit for the men. The uniform’s bright colours and overall construction is representative of the airline (orange and blues) and of the fashion styles of Indonesia.

Nowadays, flight attendant uniforms tend to be traditional of their airline’s native country and with highly saturated colours. Virgin Atlantic is based in the UK, and it’s uniform is bright red office style suits for men and women. In contrast, Thai Airways wear bright pinks and purples in a traditionally Thai silk outfit.

What do people on the ground wear at airports – Staff like Airfield Engineers?

There a lots of flight crew down on the ground from aircraft engineers to drivers and emergency staff. We are focusing on the Airfield Engineer. 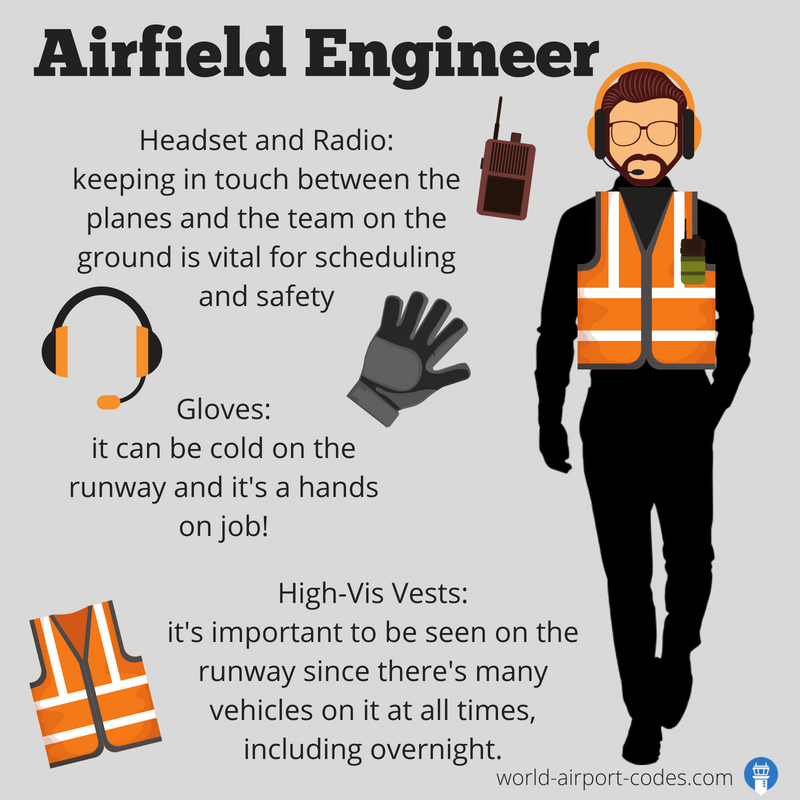 Engineers on the ground work in all temperatures and at all times of day and night so gloves, warm and clothes that are easy to move in are a must. It’s also important that they are easy to see since there’s a lot of traffic on the runway so high visibility vests are a must.

Staff usually carry radios or ‘walkie-talkies’ as well as a headset (some of which double up as noise cancelling headphones). Communication is vital since there will be members of staff all over the aircraft when it lands and they all need to work as one.

The type of high-vis, under vest clothing and even shoe styles can be dictated by the airport or airline.

What do Airport Security Guard and Custom Control Officers wear?

Inside the airport, Security Officers and Custom Control Staff are responsible for authorising who and what is passing through the airport. You’ll see these staff at airport security, passport control and sometimes even baggage areas.

Like the pilots’ uniforms, they demand a lot of respect and wear very smart and sensible clothing: shirts, ties, ID, badges and boots.

The epaulets or tags on Security Officers’ shoulders aren’t structured in the same way as pilots. Often, shoulder pads on security staff will simply read: “SECURITY” or “PASSPORT OFFICER”. It’s a useful way for passengers to recognise their role or position, but is more for the professional image and airport administration.

Like the Airfield Engineer, Security Officers have communication as a top priority and will carry a radio at all times. This is useful in case of emergencies as well as queries or for passing high alert passengers on to different teams such as swabs or police detection dogs.

Let us know what aspects of the uniform you’re interested in or share a photo of you in your airlines’ uniform with us!

Thanks for being part of the World Airport Codes Club or sign up today.

Thanks for the insight. What do Flight announcers wear?

What to airside operators workers wear

What do air traffic controllers wear

Dear Sir, madame
Could you please indicate which international regulations require a uniform for crew? I can not find any info in the ICAO or EASA rules.

What does the screening officer wear on the job? I’m doing a school project and designing a uniform. Would it be possible to email or call an officer to research more information?

I was wondering what the information booth bearers wear. Thanks!

Comment on What do Staff at Airports wear? A Guide to Uniforms at the Airport Cancel reply