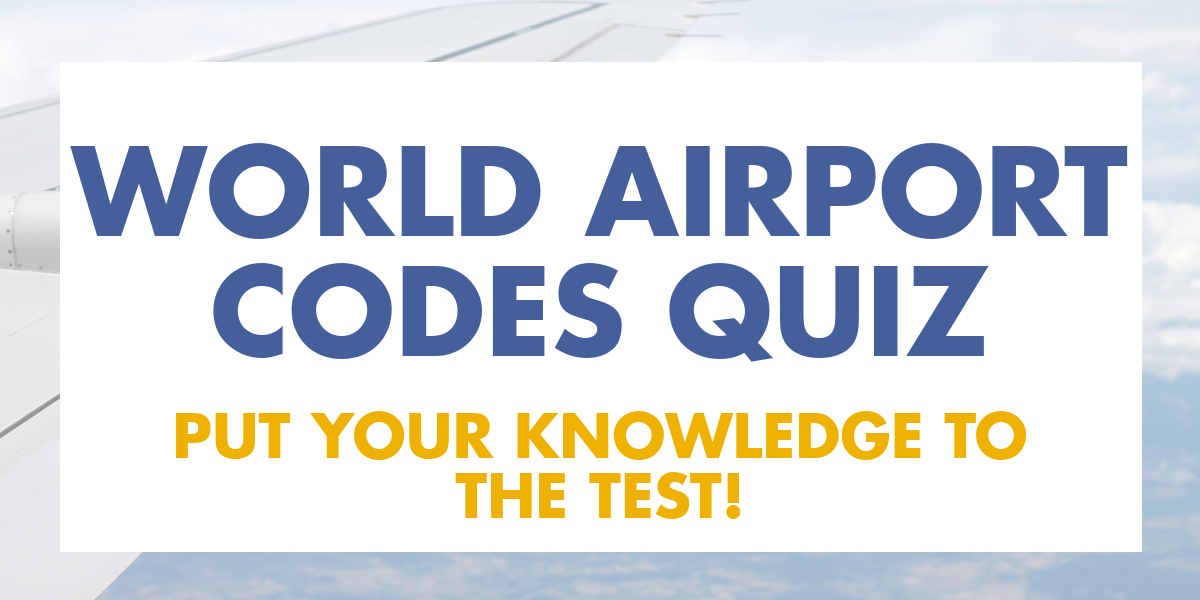 What is an airport code? – An airport code is a unique code for an airport, made up of 3 (sometimes 4) letters, used in passenger reservation, ticketing, and baggage-handling systems.

The airport has three runways

Getting a bit tricky now...

What airport could IST be!?

Its ICAO code is EGBB, if that helps ...

We admit, there's no relevance to the airports name here.

If you know this one, you're probably a pilot or an AvGeek.

Reminds us of Peking Duck, yum.

There's no way you actually know this, take a lucky guess!


How did you get on? Did any catch you out!? Put your score in the comments section!

Most of those I wasn’t sure of, as some airport codes I don’t recognize.

Oh, my goshhhh, it’s more fun, I have a wonderful day, its a great idea, more knowledge to those people who take this👍😉

Ohh my goshhhh! Have a great idea, it’s more fun for me, but I’m so disappointed when my answer is wrong, but I am thank ful for I have a new knowledge about the airport quiz, thank you!

Regarding the airport code, it’s hard not to imagine what the codes actually mean

Got 9/20 not familiar with codes HAHAHAHAH

Good deal! Not bad, not bad.

First attempt at this. Very helpful in my opinion. Great way to just test your knowledge.

Stinker–I got only 40% (8/20). This was hard, even though I had a lesson on them for my introduction to hospitality class last year. I don’t think we had as many international codes, though.

this was a great way to test my knowledge.

I actually loved it!

So much fun…thanks a lot,additional knowledge.

Very useful as a learning tool!

This was definitely a tricky quiz! As I was taking it i kept saying “No way that’s the right answer!” LOL. But I do think they should give little hints to help us out a little bit.

Bit hard but had a good go.

Hmm, you seem to be right as I just tested it and got 0 too…We’ll take a look into why this isn’t working!

Quiz should be working again now, I have just retested it

I just wanted to see how many o could guess.

That was fun and easy!

It’s good to know about the airport codings. It so helpfully.

these was not what I expected

Just brushing up on some airline skills.

I guessed on so many, I just want to see my results.

That was fun and easy!

learnt some of the airport codes

hello my fellow friends. i have gotten 40% ET will be proud!!!

It was good refresher for me.

I got 19 out of 20 correct. I would love to study more about this. This is something that you never thought that you would use. ( I guess depending on the destination)

Throughout this test, they should give a travel agent overview of each city, to help sell these cities and our junior agents, thanks.

You know, basic geography and points of interest.

Thank you for your suggestion Mikey, that’s a great idea! I’ll pass it on :D